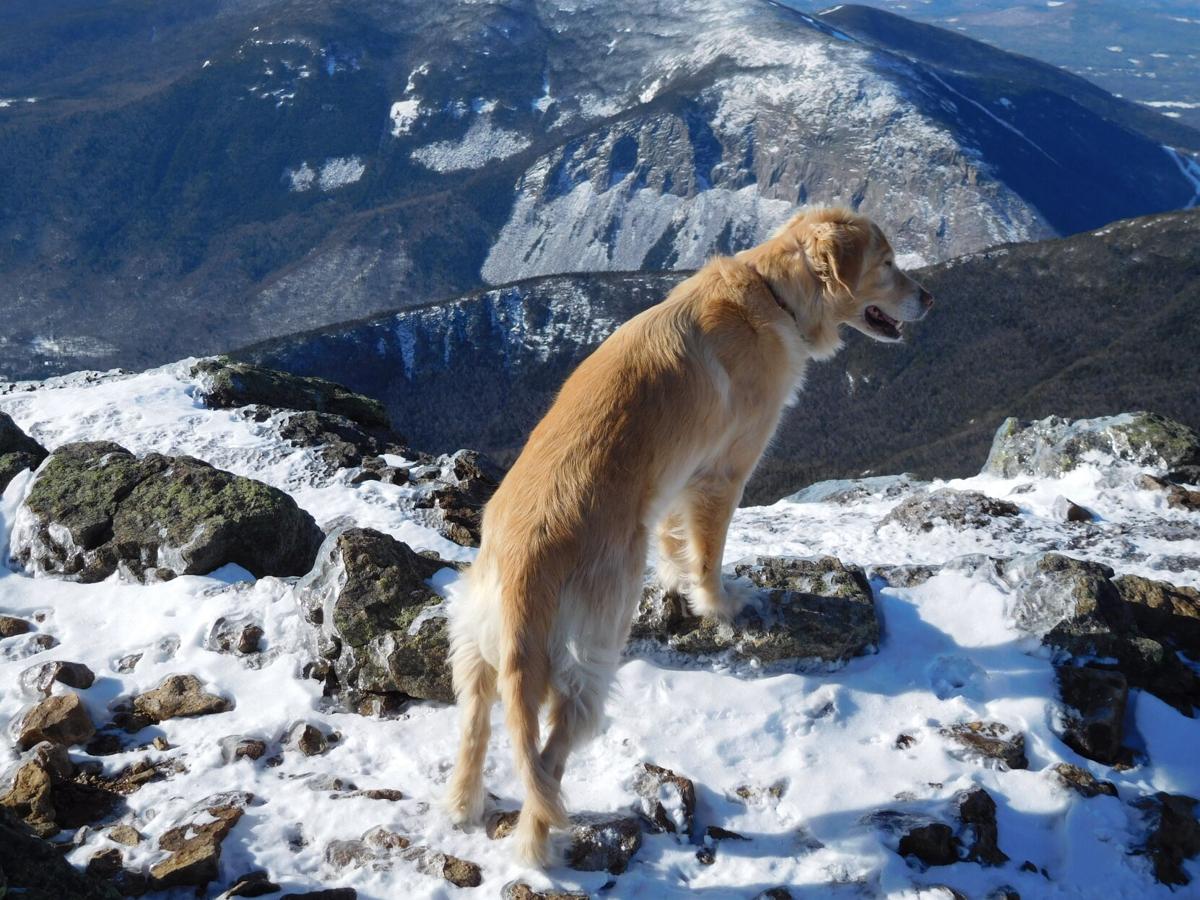 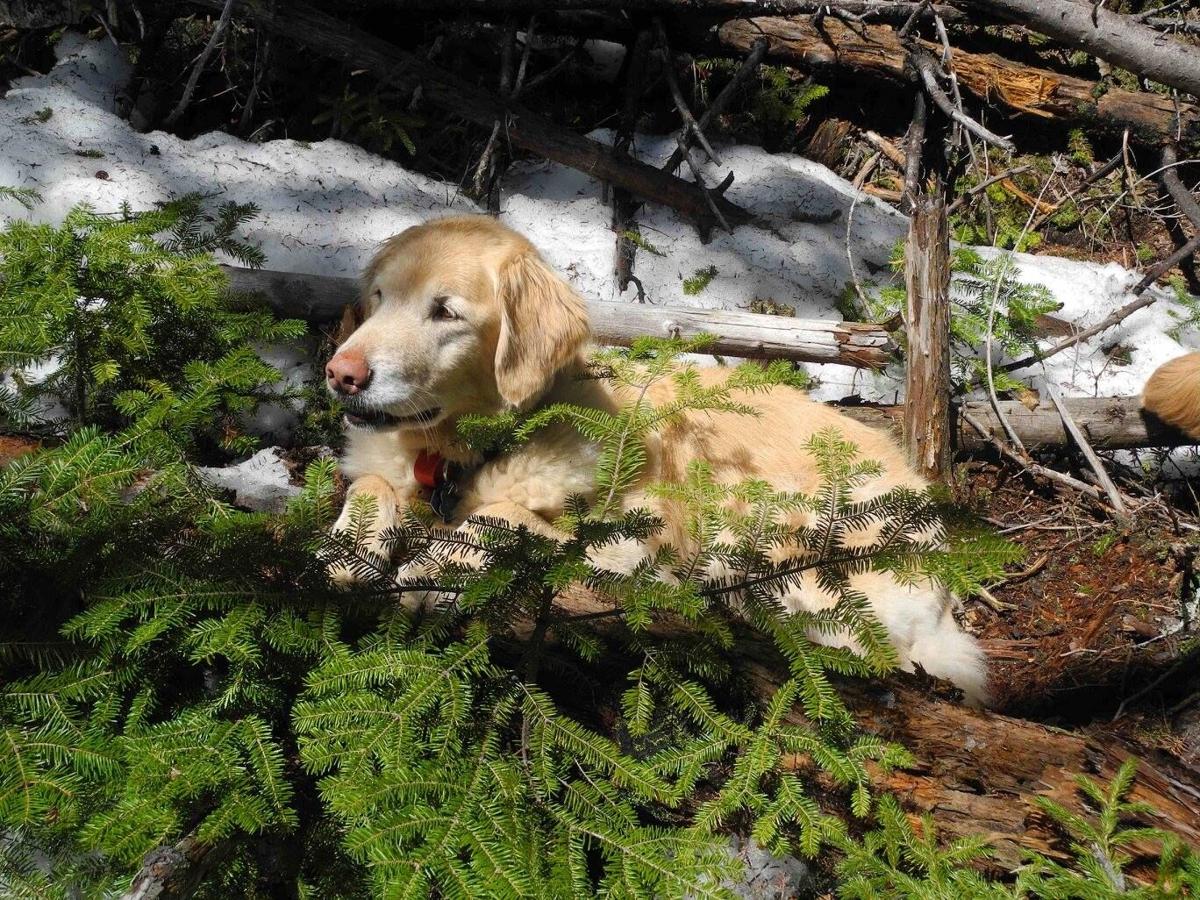 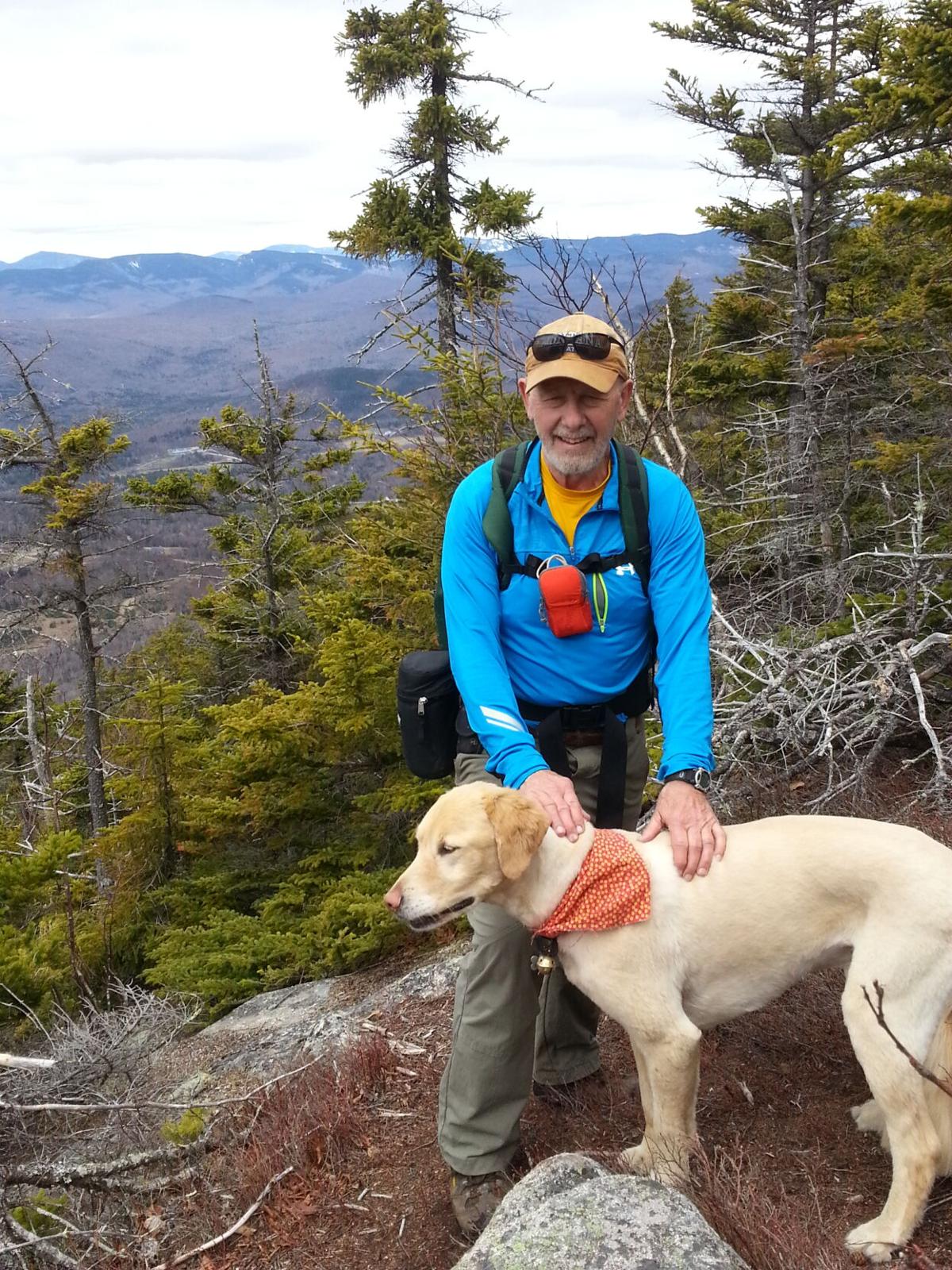 Gordon Dubois is a hiker and writer who regularly writes about his trail time in the Northeast. He has published stories in several outdoor publications. In 2020, he published Paths Less Traveled: Tramping on Trails and Sometimes Not to Find New Hampshire's Special Places.

Reuben has been his constant companion in the garden and on the trails, which led him to write this heartfelt tribute.

While working in my community garden plot at the Bluffside Farm (Vermont Land Trust) in Newport, Vermont I glanced over at Reuben. He was lying peacefully, stretched out across the laps of two counselors with the Vermont Youth Conservation Corp. They were stroking him gently and several of the young Corp members looked on. I saw a few hands reach out to Reuben, caressing his soft fur and floppy ears.

Reuben looked inquisitively around, enjoying the attention. I heard words softly spoken, words I couldn’t hear, but I speculate they were discussing Reuben’s imminent death the next day. I had told them earlier that Reuben’s body was riddled with cancer. This was his last day on earth and he would be euthanized tomorrow. I wondered what they were saying. Perhaps they were sharing their own grief over losing a pet or pondering the bigger questions of life: Why is there suffering? Is there heaven? Do pets go to heaven? How does it feel to loose someone you love?

Reuben accompanied me every day when I went to work in my garden plot, pulling weeds, turning-over the soil, planting seeds and watering the tender new vegetable plants. He wanted to join me in the garden, dig a nest and lay in the soft, warm soil which was comforting to his aching body. I didn’t think this would be appreciated by the other gardeners. So Reuben was told to stay outside the fence. However, he always found a comfortable, shady spot in the tall grass, under an ancient maple tree. He was content to lay there, enjoying a soft breeze that occasionally wafted across the fields. He would frequently raise his head, put his nose in the air to smell a flower blooming, or manure being spread across the hay fields.

After watching Reuben and his new found friends lounge in the shade, I returned to my garden work, allowing Reuben to rest comfortably.  Gardening can be a meditative experience and while working the soil I thought about Reuben and his gentle spirit, always bringing out the best in people and in this case members of the Vermont Youth Conservation Corp. So often young adults are cast-off, stigmatized as self-centered, lazy trouble makers, glued to their cell phones and having little ambition. I believe just the opposite and Reuben reinforced my belief. I saw caring young people, concerned with the impending death of a dying animal. Reuben always had the innate spirit of breaking down walls of preconceived ideas and prejudices. Walls that  separate us from each   other.

So many times on our hikes together Reuben would gallop up to people and greet them, no matter what their disposition or mood. Reuben would wag his tail, give them a barking hello and rub his body against their legs. The walls between hiker and dog would disappear and the questions would flow: Can I pet your dog? What’s his name? How old is he? Where are you going on the trail, how much further to the parking lot? Out of those questions a conversation would develop about hiking with pets, trail conditions, backpacking and a sundry of other common interests. Reuben would sit, his head cocked, listening to the babble, probably wondering why he wasn’t included in the conversation, after all he was the trail greeter. (Some people referred to him as the Wallmart Dog, as in the Wallmart Greeter). After a while Reuben would dig himself a soft bed in the woods and wait for the banter to end.

After a while we would start trekking again, with Reuben bounding down the trail ahead of me, hoping to greet more hikers and making new friends. He especially liked to accost young hikers, as they mad a fuss over him and he would gloat with pride from the attention he was getting.

So often when we hike or take a stroll on the street we pass-by others, not making eye contact, saying hello or even acknowledging the other. We just simply mind our own business and continue on our way. However, Rueben isn’t aware of this social distancing behavior. He would never pass up an opportunity to welcome a passerby. He had a way with people in breaking down the social barriers that tend to separate us from one another. He would sometimes bark a friendly greeting, or simply look them in the eye with his friendly smile as if to say, do you want to be friends? Just as on the trail, Reuben would bring out a string of inquisitive words from his new found friends and this would bring about an extended conversation. The social walls that separate us would disappear: our political views, race, social class, economic standing, looks, or age. This is especially true today with our country so terribly divided, separating even family and close friends. Reuben could break down walls that no politician, community organizer or social worker could do. With his gentle nature, handsome look, and inviting personality he could bring people together who were struck by his loving personality.

Just as with the youth of the Vermont Youth Conservation Corp who circled around Reuben on his last day, he brought out the best in people, bringing them together, breaking down social barriers and helping to connect people in a common bond of friendship. In return Reuben got to be stroked, spoke to, hugged and loved. Reuben would even be invited into a neighbor’s house for a treat or to lounge on their porch.

Now on his final day in the company of young people Reuben was in his glory, finding attention from a group of strangers, being caressed and loved. He was again revealing the gentleness in others with their soft words of sadness, a pat on the head, and a gentle stroke along his cancerous laden body. What better way to spend your last day on earth. This day was like many other days in his fourteen years of life, bringing out the best in others, and connecting people to a common concern, that is sometimes hard to find in our self- absorbed world. This is Reuben’s legacy that he has left for all that knew him.