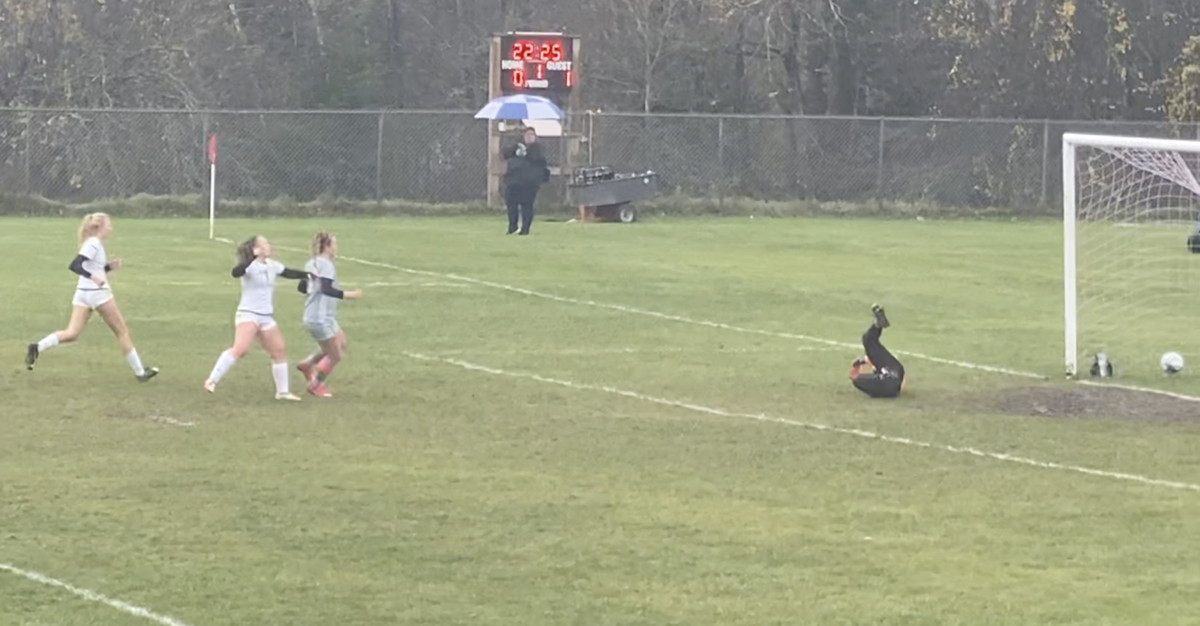 Paine Mountain's Emma Korrow ties the game at 2 - 2 in the first half of the quarterfinal game against Green Mountain.

WILLIAMSTOWN, Vt. - On Saturday, October 30, the Paine Mountain Girls Soccer team took advantage of the cold rain and slippery conditions in a ball-skidding victory over the Green Mountain Chieftains to advance to the state semi-finals. The final score was 5-2.

Green Mountain struck first when standout Kim Cummings arced a long direct kick into the upper center of the Northfield goal to put the Chester school up 1–0 ten minutes into the game.

The teams then traded goals, with Cummings putting a long roller in the left-hand corner past Paine Mountain goalie Erin McGinnis. Not long after, Paine Mountain's Piper Matson's delivered the 2-2 equalizer with an outside drive into the right corner with 14 minutes to go in the half.

Destiny Campbell gave Paine Mountain a 3 – 2 lead with three minutes remaining in the first half, knocking in a loose ball off a corner kick.

Both teams remained vigilantly out in the rain during the halftime break.

The second half was a story of a dominant Paine Mountain offense against the resolute goaltending of the Chieftain's' Luna Burkland.

Burkland pulled multiple shots away from their intended destination, including a series of acrobatics. She stopped a high shot on the net, then made a diving swipe to keep the carom from crossing the line, and ultimately picked off a follow-up crossing shot to stop the drive.

Despite Burkland's heroics, Paine Mountain peppered the keeper until Rebecca Dupere slipped by two defenders and landed a left corner goal from a difficult angle, making it 4 – 2 Paine Mountain.

As time waned, Emma Korrow once again relied on her feted footwork to break free for multiple shots, the last of which nailed Paine Mountains' 5th and final goal, her second of the game.

In the second half, Erin McGinnis saw multiple attacks by the Chieftains but repelled them with steady hands and a rebuttal of long kicks up the field.

Paine Mountain Coach Stephen LaRock credited his players' season-long effort in the win, as Paine Mountain twice rallied from behind.

"I think it's just the nature of this team; it's been them all season. We went down 1-0 to Lamoille and we bounced back and won that game 6-2. They don't let down. They don't stop playing. Early in this game, we had the best chance, and I thought for sure we were going to go up 1-0 early, and we didn't. So it's a matter of us staying composed and smart and just knowing that they can do it."

On Wednesday, Paine Mountain travels to Stowe to face the undefeated Raiders in the semi-finals, and LaRock is looking forward to the challenge.

"We played Stowe earlier in the season; that was a back and forth battle. They won 4 – 3. So we know we can compete against them."