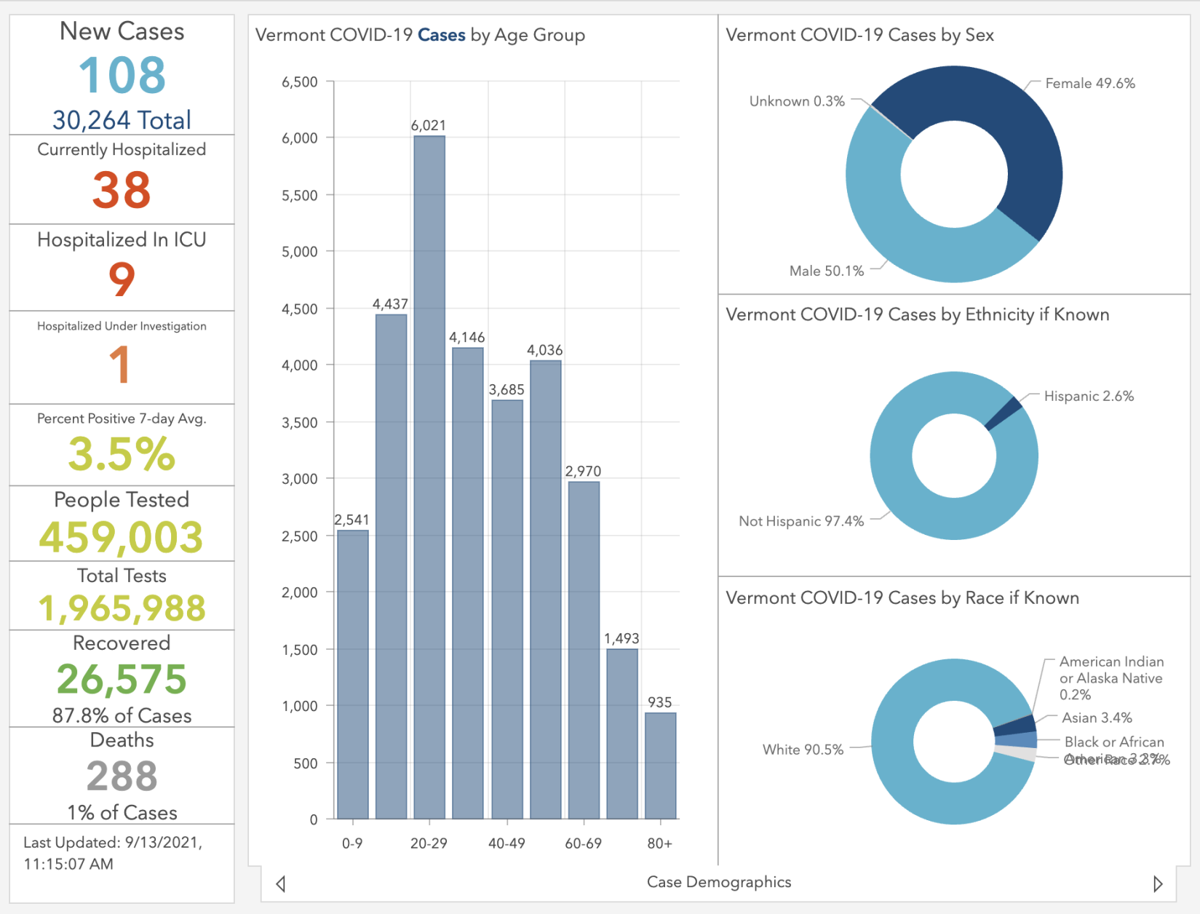 Reminder to Remember:  This is CompassVermont.Com

"I don't live with my grandma, but if I did, I would have probably gotten it, just for her sake."

"It" is the COVID-19 vaccination shot, and that was a quote in a recent New York Times article titled Why Young Adults Are Among the Biggest Barriers to Mass Immunity.

While Governor Phil Scott and his administration have led Vermont to the top of the pack with their handling of the COVID-19 pandemic, the most significant outlier in helping them check all the boxes is adults between the age of 20 and 29.

In each age category, Vermonters who have received at least one vaccine shot range from 72% to 99%, the 20 - 29 group sticks out at 61%, although still ahead of the national average of 57%. According to the Vermont Department of Health's daily update of COVID data, the 20 - 29 group has now surpassed 6,000 people.

A September 5 article in Forbes provides some insights into this group's mindset and the vaccination-hesitant population in general.

This age group is followed closely by 30-49 year-olds, 19% of whom say they will never be vaccinated, and 58% report at least one dose.

18% OF MEN SAY THEY WILL NEVER GET A SHOT

A gender gap in vaccine uptake has emerged and persisted in recent months, according to Kaiser. Fewer women say they will refuse the shot—10%—and are much more likely (71%) to report being vaccinated than men (63%).

According to data collected by the CDC, which covers around 90% of shots given, 53% of recipients are women and 47% men.

Three other essential statistics emerged from the Kaiser study.

According to Kaiser polling, the vast majority—90%—of this group say they are not worried about getting sick from Covid-19 and are less convinced the vaccines work.

Those with no plans to get vaccinated also distrust companies making vaccines (17%) and against vaccines more generally (12%).

According to polling by Morning Consult, concerns about side effects were consistently the top concern for different groups open to taking the vaccine.

Fears the vaccines moved through clinical trials too quickly was another top concern, reported by 31% surveyed.

14% of unvaccinated people believe the shots are minimally effective at preventing death from Covid-19, and 19% say they do nothing to prevent serious illness, hospitalization, or becoming infected if exposed, according to polling by Kaiser. Only 2% of vaccinated adults hold similar opinions.

According to a recent U.K. study, vaccines drastically lower the odds of severe illness, hospitalization, and death among the few vaccinated people infected with Covid-19.

ANOTHER TAKE ON THE RESISTANCE

Vermont continues to lead the COVID-19 battle, but these factors suggest that little more ground is to gain from the 20-somethings.

However, another voice contends that a significant reason 20-somethings aren't getting vaccinated is that they aren't receiving the right message on the right platform.

One quote stood out in an April article in Slate, contending that no one speaks to Gen Z's in their language.

"There isn't anything that is consumable and/or targeted at our demographic," said Gabrielle Kalisz, a 22-year-old who lives in Washington, D.C., and who has been vaccinated. "All the messaging online … isn't targeted toward our age group; it doesn't explain why, if you're a healthy 19-year-old, you should get this vaccine."