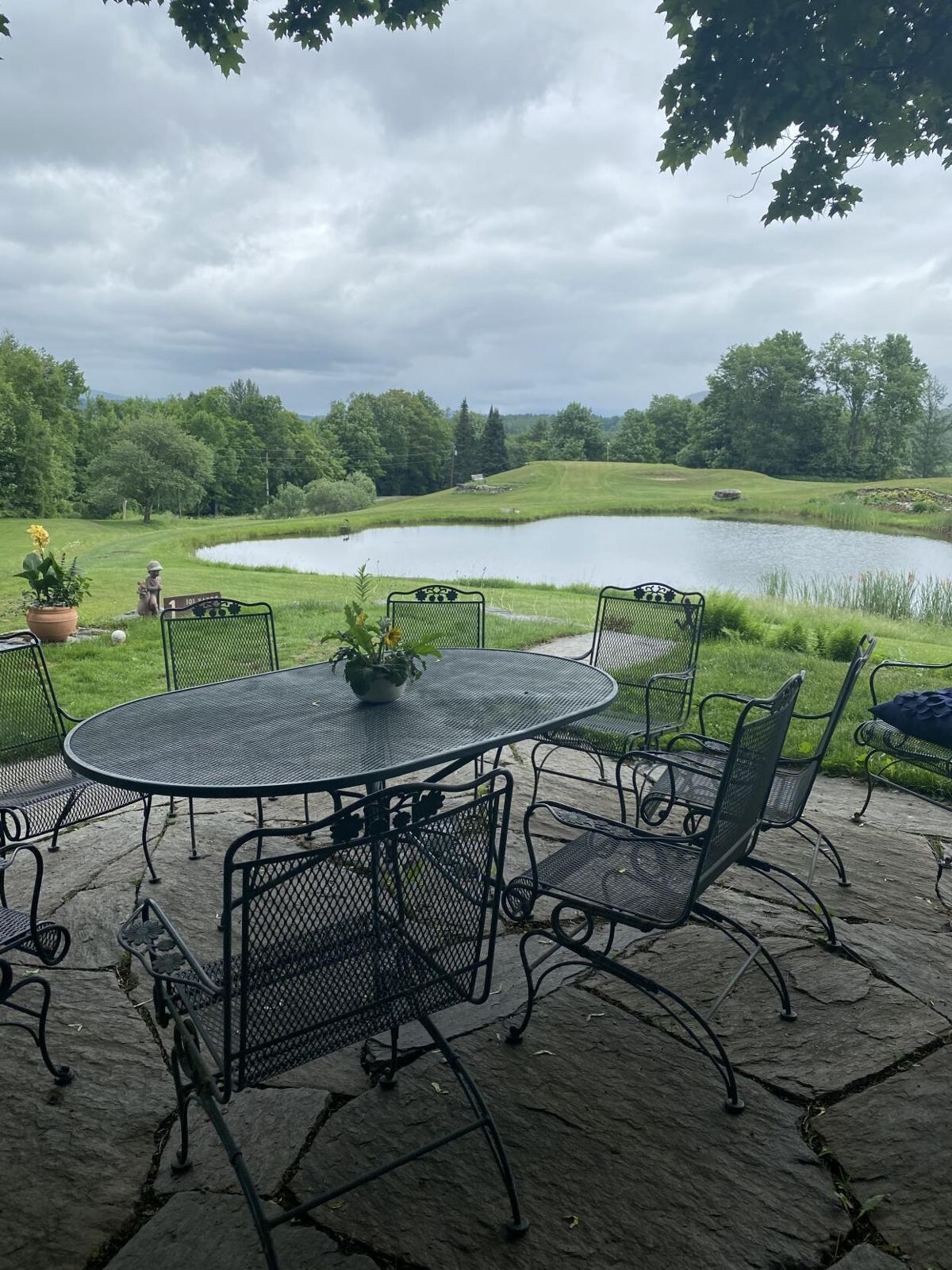 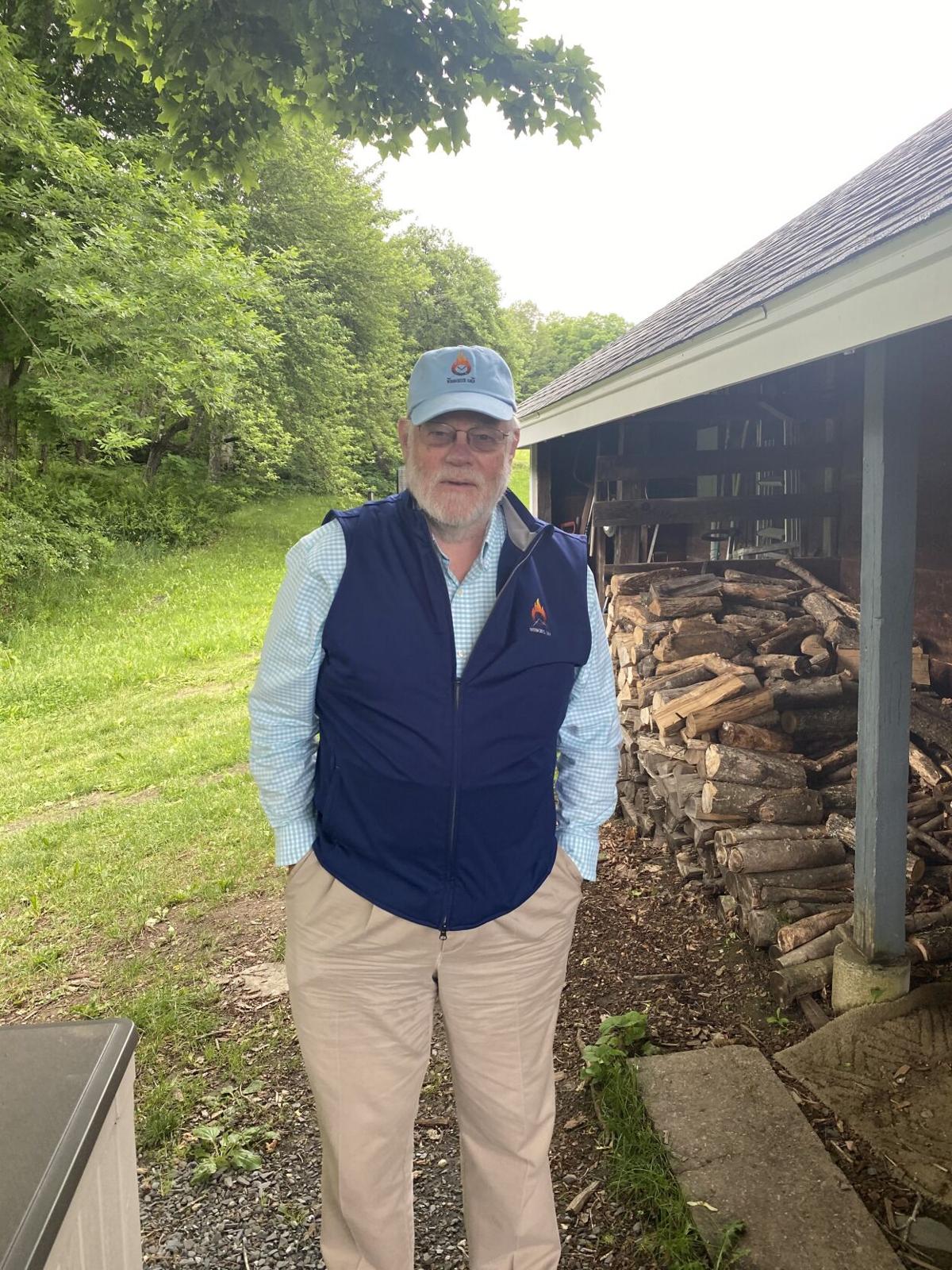 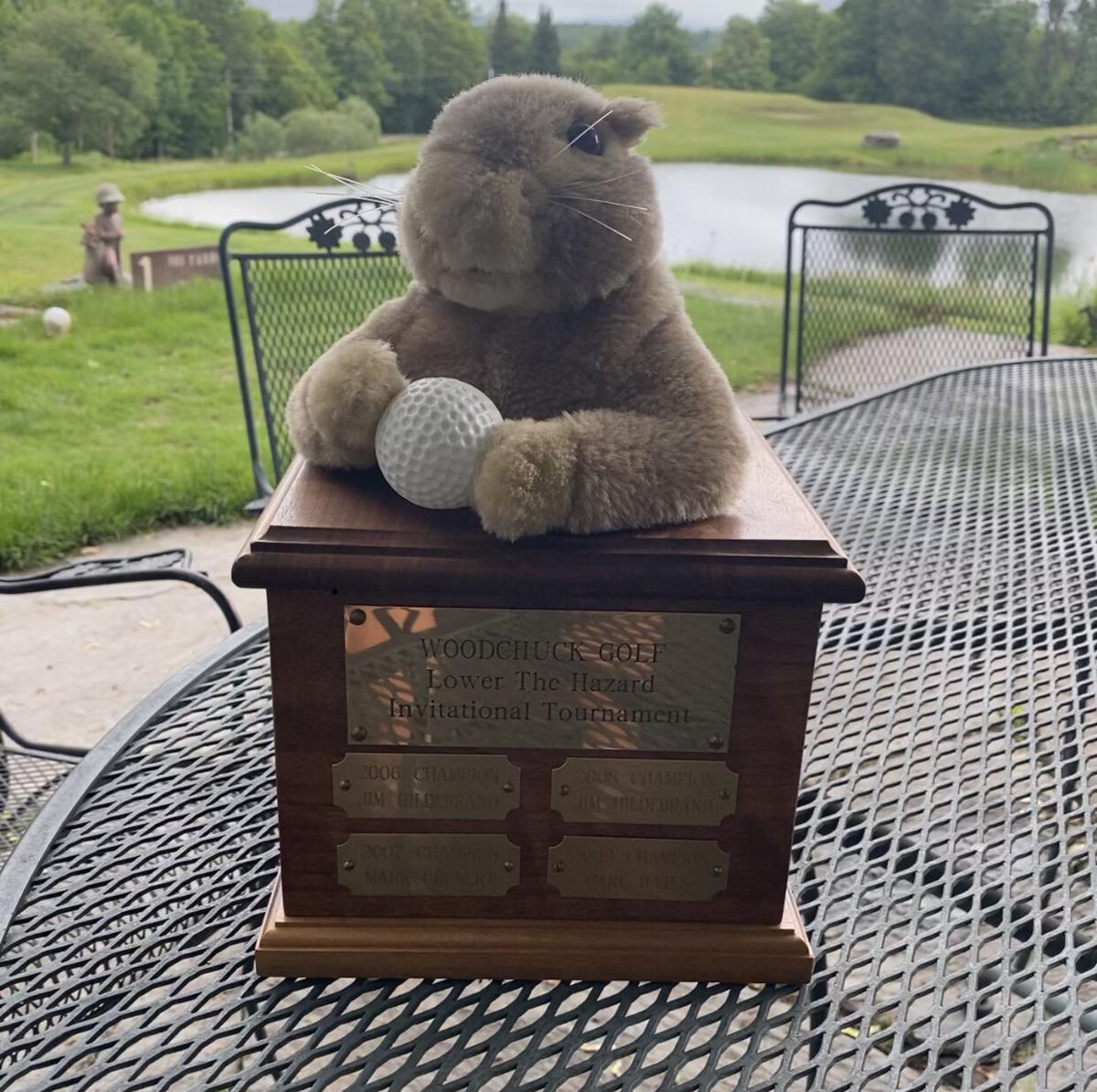 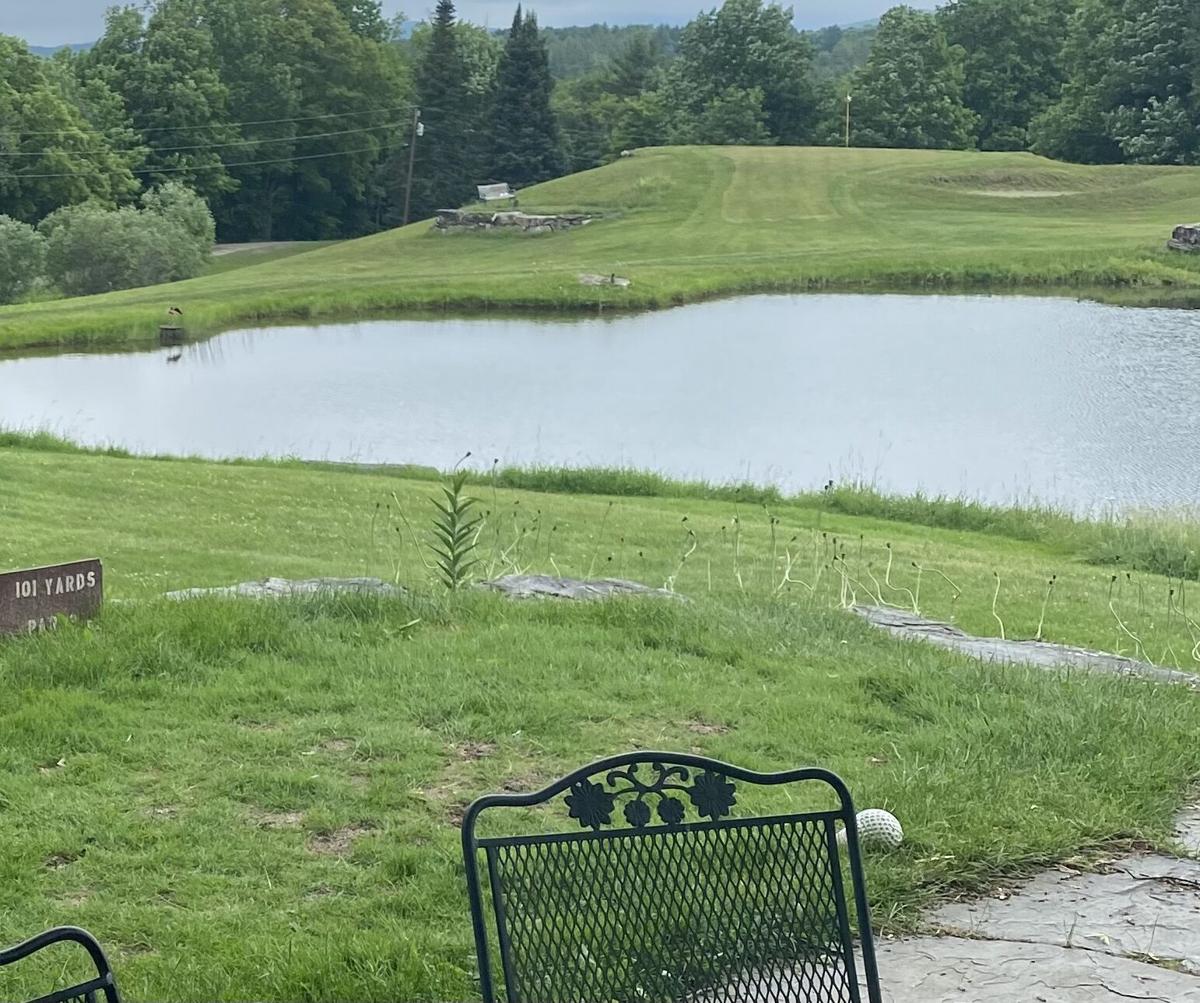 The first tee at Woodchuck Golf.

WAITSFIELD, Vt. - The patio on the side of Spencer Potter's Waitsfield home looks out over the Hunger Mountain range. Sitting there at his wrought iron table where Spencer, his wife, and friends often dine, you can also see Jay Peak on clear days.

In the foreground is a tidy pond and a lovely combination of fields and trees, all tended to with care.

"We were sitting right here at this table, looking out over the pond, when my friend said, "you need to build a golf course where we can hit across the pond and over to that mound on the other side," Spencer told Compass Vermont.

Spencer slightly smiles as he reflects on how quickly he took the challenge.

"There are people you know that are acquaintances, there are friends, and there are good friends. When a good friend says, I think you should build a golf course, you put your gear on, and you go to work."

Potter said it began with the mowing sections of the eight-acre property and developing a six-hole course layout.

"We did six holes right off the bat. It was just field grass, but the name Woodchuck Golf came along because I had to fill over 100 woodchuck holes," he laughs.

In the beginning, cedar posts marked the tee boxes and greens. Many friends and neighbors offered suggestions for improvements as things got going, so Spencer set up a simple policy.

"We have a local rule here that if you see something that you think needs working on, don't bother to tell me, just come do it," said Spencer.

Over time, through his support system, yardage signs just showed up (installed by his neighbor up the road), tee box markers arrived on every hole, and a footbridge across the creek was magically rebuilt while Spencer and his wife were away.

Seventeen years later, Woodchuck Golf accepts reserved tee times online and has welcomed golfers and groups from all over the world.

As for how many people have played the Woodchuck Golf six holes, Spencer replied, "I don't want this to feel like a business, so I purposely don't track the numbers. It's pretty steady. Weekends, weddings, and pre-covid we used to get a lot of school reunions," he says.

Despite the amount of time and care Spencer puts into Woodchuck Golf, this isn't his only job. He is a professional tax assessor in charge of grand lists for various communities. Currently, he is reappraising the town of Mendon.

"I'm one of these people that hopes never to retire."

Spencer's work helps him keep from charging people to play Woodchuck. Instead, he asks for donations to charity in any amount people choose to contribute.

Much of the time, after booking a reservation, golf groups will meet Spencer when they come to play. But, if he isn't there to greet you for any reason, he provides a small box on the side of his house, later giving all proceeds to the local Food Shelf. He'll even take food instead of cash.

"If you choose to bring non-perishables instead as your donation, you can just put them under the box," Potter tells us.

When you book a tee time at Woodchuck Golf, the place is yours. The fairways criss-cross each other, with the pond as the common airspace for balls in flight, so Spencer wants to make sure a crowded course doesn't become too dangerous.

"I only let one group out a time, so you're not getting in the line of fire," he said.

Spencer recalled welcoming a group of West Point graduates who set up a military spotting system, so none of the 14 were in the line of fire. "They had a ball," he recalls.

Spencer says over 3,000 balls have found their way to the bottom with the pond in play on every hole. He pays a local high schooler ten cents each to fish them out.

Many folks show up thinking Woodchuck Golf is a pitch and putt, arriving with two or three balls in their pocket, a pitching wedge, and a putter.

"They don't realize this is a real course with challenging holes. For example, one par four is 290 yards long," he points out. "You're not going to get through all six holes with just three golf balls."

To help them out, Spencer places the balls retrieved from the pond in buckets at various locations along the course. "You run out; you just grab a ball from the bucket," he says.

An additional hazard is Spencer's house. "Hole number four comes up the fairway by my home, and there is a six-stroke penalty for hitting the house," said Spencer. "We've had eight balls off of the roof, and somebody once hit the red door between the windows, but no windows have been hit yet."

No one has yet to score par or below

There are two par-four holes and four par-three holes at Woodchuck for a total par of 20, and none of them are easy. In early June, a young Babson College alum broke the previous record of 22 by shooting a 21, still one over par. Spencer says many good golfers come out trying to push the course for a lower score, but with the pond in play on every hole, he stressed how important it is to "play within yourself."

Following Spencer's rule of just making something happen at Woodchuck instead of asking him, friends suggested an annual tournament with a rotating trophy.

A local cabinetmaker constructed the official Woodchuck Golf Tournament trophy, including a stuffed woodchuck reminiscent of the movie Caddyshack. It has been the coveted award to the winner of the tourney since 2006.

It's all about a girl doing a cartwheel

Spencer has hosted high school teams doing golf clinics, class reunions, and any number of charitable events, but the one thing he told Compass Vermont that distilled his entire vision was this.

"A father can come out here with his daughter. She can swing the club, hit the ball, do a cartwheel, or play tag with her sister, and then she can hit the ball again and just have fun.

Try doing that at a regular golf course.

For Spencer, Woodchuck Golf is about people having fun, enjoying the course, and helping out the local community, which is why he and his neighbor asked Compass Vermont to plug an upcoming charity event.

We were glad to do it.

Help the local Meals on Wheels by playing on June 26

Format:  Scramble - one group plays at a time.

Info: Teams of 4: $50 per person. If you don't have a team, they will pair you up—refreshments during the day—lots of prizes and raffles.